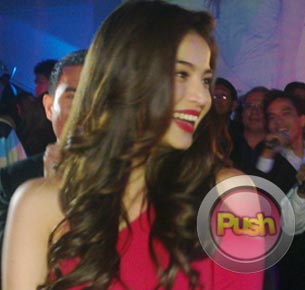 Now busy preparing for the March 7 premiere of Who’s That Girl, both Anne Curtis and Luis Manzano are excited about their new romantic comedy, which was directed by Wenn V. Deramas. “Hindi siya typical love story. Ang idea ni Direk Wenn is to change the idea na pag love story, very rom-com lang, pa-sweet lang, may away tapos magbabati. Ayaw niya nung ganun langso linagyan niya ng twists,” she shared during theWho’s That Girl presscon held last February 4 at the City Best Restaurant in Tomas Morato Avenue, Quezon City.It’s been five years since they first worked together on the fantasy soap opera series Kampanerang Kuba, as well as in movies like All About Love and Ang Cute ng Ina Mo and Anne says she feels lucky to get the chance to work with one of the people she considers as one of her closest friends. “It’s so much fun to work with him.Nagkukulitan lang kami. Sa Kampanerang Kuba pa lang magkasama na kami. It helps kasi hindi na kami nagkakailangan. Of course when you’re shooting a movie you have to do the scenes over and over again because of the angles and different shots. Sa aming dalawa, hindi na kami nagkakailangan kasi matagal na kaming magkakilala, we just say, ‘Let’s do this.’ Wala kaming special feeling at all (laughs),” she shared.The 25-year-old Fil-Australian actress said that she has noticed that Luis’s acting has definitely improved from when they first worked together in a soap in 2005. Since then, Luis has won Best Supporting Actor awards and nominations for his work in the 2009 film In My Life where he played a homosexual man in a relationship (opposite John Lloyd Cruz) while working abroad. “Oo naman I can say that. May acting award na nga siya ‘di baso I’m very, very proud of him. You know, coming from a place na si Manzano na ‘pag may iyakan scenes, nag-preprepare talaga siya. Yung mga techniques na aaralin niya, nasa iPod na niya. Ready na siya. Now he’s a superb actor,” she declared.With a friendship that spans over a decade already, Anne said she is lucky to have Luis in her life on and off the set. “Kung meron mang isang tao na I rely on so much and I tell him for everything, kung may kinaiinisan ko,may gusto kong iyakan na tao, siya yun. He’s one of the people that I choose, and during that time, siya talaga yung tinatakbuhan ko sa lahat ng mga problema ko. So siya yung hinahanap ko,” she admitted.With the premiere telecast of her newest Primetime Bida show Green Rose tomorrow night, daily hosting duties on Showtime and the Who’s That Girl premiere next month, Anne definitely has her hands full with showbiz commitments. But despite her busy sched, Anne admitted she would also like to continually improve in her acting and fulfill one of her dreams, which is to be considered for an award someday. “Ang hirap hirap ng acting.Ang hirap ng timing. The last dramatic movie I did was Baler and In Your Eyes. Sa Showtime I learn the timing ofpaano pagkuha ng linya. I think that helps a lot, but of course at the end of the day I still want an acting piece. I’m blessed na at the same time I was doing Who’s That Girl, yung teleerye ko rin ginagawa namin so at least nag-i-even out yung ginagawa ko this year. Hindi puro isang klase lang lahat. May comedy, may hosting tapos maydrama. So masaya naman but still I want to do serious acting sa peikula at sana mapagbigyan ako. It also adds to versatility when you’re given a chance to do different genres in acting,” she said.

BREAKING NEWS: Teenager Falls to Death at a Mall in Mandaluyong