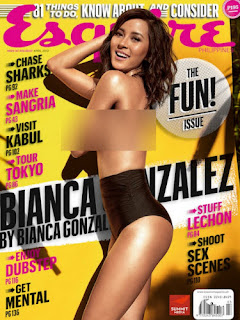 Bianca Gonzalez, one of the hosts of ABS-CBN’s reality program Pinoy Big Brother, is known for being reserved and wholesome and her cover for Esquire came as a surprise to her fans.
The 29-year-old host was photographed wearing only a black bikini bottom by BJ Pascual (her makeup was done by Lala Flores, hair by Ney Guese, and styling by Liz Uy).
Despite the mixed reactions the said cover is getting from netizens, Bianca is “happy” to see the outcome of the pictorial that she did for the lifestyle magazine.
“Thank you, Esquire Philippines, for putting me on your April cover!,” she tweeted. “It was an honor as well to write my own cover story!” she added.
What do you think of Bianca’s Esquire magazine cover dubbed as her most daring yet? Too sexy for her personality or just the right amount of skin exposed?

Cristine Reyes admits she and Rayver Cruz talks about marriage