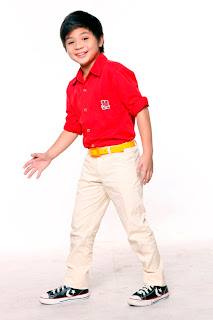 It has captured the hearts and minds not only of its avid viewers but its whole cast as well.

“Because of ‘E-Boy,’ I’ve learned about the importance of family, unconditional love and the will to do whatever it takes for the sake of your loved ones,” Agot Isidro said. In fact, even the hearts of her co-actors Ariel Rivera and Jomari Yllana were also moved with the message that the drama series wanted to impart on its viewers.

At such a young age, Kapamilya childstars Bugoy Cariño and Deydey Amansec, on the other hand, learned the true meaning of love from the different exciting adventures that their characters E-Boy and Miyo had experienced in the series. According to Bugoy, “I have learned from “E-Boy” that anyone has the capacity to do anything if there is love.”

On “E-Boy’s” last week, tension arises as the characters help each other hand in hand to stop Miguel’s (Jomari) evil plans. Will Miguel finally succeed in getting his hands on E-Boy? Can Gabriel (Ariel) sacrifice E-Boy to save his wife Ria (Agot)? What will E-Boy and Megabot do to prevent Miguel’s plans from prevailing?

“E-Boy” is a part of ABS-CBN’s “Bida Best Kid” campaign launched recently that aims to empower children by encouraging them to become who they want to be and the best that they can be. It doesn’t only entertain and educate its young viewers with its values-oriented, child-friendly programs, but supports their dreams and aspirations as well.

Top 5 Animals to AVOID in Australia