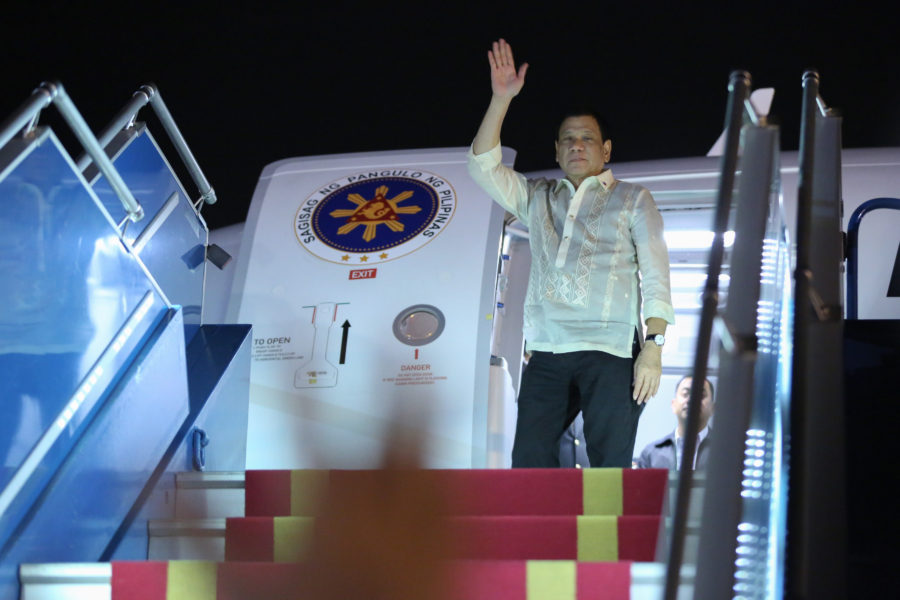 President Rodrigo Duterte admitted on Tuesday that the final list of individuals, including barangay, police and government officials, who are involved in illegal drugs are too many for him to handle.
”I’ll be frank with you, the final list submitted to me by the law enforcement agencies, this thick,” President Duterte said while showing a two-inch distance between his thumb and index fingers to the media before he left for a three-day visit to Japan, at the Ninoy Aquino International Airport (NAIA) Centennial Terminal.
”I don’t know now how to find solution for this. This state, there are about a thousand policemen involved in drugs, there are about almost a thousand barangay captains already in the business of shabu, there are about — few mayors and national officials,” he added.
President Duterte said he might call for a consensus among the government officials, including from the Senate and the House of Representatives on how to eradicate the almost four million Filipino drug dependents.
”This problem is too heavy that if I will do it alone, I cannot solve it. I mean, what I should do to them. Do I have to kill them all?,” he asked.
President Duterte said he was aware that illegal drugs needs full attention but he did not expect the magnitude of the problem until he launched a strong campaign in just the first four months of his administration.
”This is the kind of problem hidden all these years until I became President and when I shook everything, it was exposed. It has affected the entire gamut of…I must admit, I don’t know how it spread. I did not expect its deep. By the hundreds of thousands,” Duterte said.
The President said it would be impossible to prosecute all the more than 700,000 drug dependents who surrendered and over 22,000 who have been arrested by the authorities.
”Three years ago, General (Dionisio) Santiago (of Philippine Drug Enforcement Agency) said that there are three million drug addicts already. I did not consider my list because until now, there are people surrendering. And by the end of this year, I would have reached the four million mark,” he said.
In the first three months of anti-illegal drugs campaign, almost 1,500 drug addicts have been killed in legitimate police operations, according to the Philippine National Police.
He said a Chinese businessman has donated a mega drug rehabilitation center that can house 10,000 people in Fort Magsaysay in Nueva Ecija while another Chinese foundation is building another in Mindanao with 20,000 in-patient capacity. (PNA)
Source: Duterte News
Facebook Comments
Post Views: 76

Shamcey Supsup: ‘When it comes to my private life, I’m a...