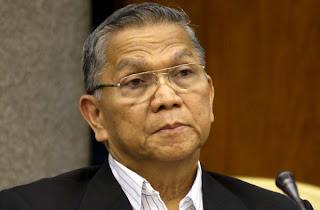 By Thea Alberto, Yahoo! Southeast Asia Feb. 08 2011
The Reyes family is distraught and grieving over the sudden death of their patriarch, Angelo Reyes. They’ve made it known that they do not wish to receive flowers or prayers from the former government official’s critics.
“The family is very, very devastated. They request those people who maligned the secretary in public not come to pay respects,” said Patricia Daza, the Reyes family’s spokesperson.
Critics singled out
“They’re not welcome,” she added, singling out lawmakers who hit Reyes during committee hearings on military corruption, soldiers who “fabricated lies,” and 1-Utak, the party-list group who dropped Reyes as their Representative in the previous elections.
Nonetheless, the family is also thankful to Reyes’s friends who condoled with them.
“We find strength in our unwavering belief that all his life, our father served our country with honor, dedication and integrity,” Daza read from the family’s statement.
Signs of depression
Daza quoted the family as saying that prior to the incident, Reyes showed signs of depression.
“He has lost a lot of weight. He was very depressed, he lost a lot of focus,” said Daza.
The apparent tipping point for Reyes was when his wife was dragged into the military corruption issue.
“He wanted to spare his family, the military, PMA [Philippine Military Academy]. Till the very end, he was a general,” Daza added.
Reyes’s body lies at the Ascencion Chapel at the Arlington Memorial Center. Daza said the former general was wearing his white military tux.
“Not in his character”
Meanwhile, friends were surprised at Reyes’s action.
“I will never think that Angie Reyes will do that. But ‘nung gawin niya I appreciate it more. Maybe mahirap magpakamatay for somebody or for an institution,” said former AFP Chief of Staff and PDEA Chief Dionisio Santiago.
Santiago said Reyes tried to salvage what was left of the military and PMA’s good image.
“That act is an act of courage to save his beloved alma mater, the PMA,” he said.
Santiago said Reyes was a tough guy but had a soft heart when it came to his family. He also lamented that Reyes was never confirmed in the Commission on Appointments when he was part of former President Gloria Macapagal-Arroyo’s Cabinet.
Prime Berunia, who worked with Reyes since 2001, said he was also shocked with the news.
“Na-shock kami, alam niyo personality niya is very strong masa-shock ka talaga dun sa nangyari sa kaniya,” Berunia said.
Former TESDA Chairman Augusto Syjuico paid respect to Reyes.
“It is a tragedy that a man like Angie Reyes found a reason to take his life. I think that the doubts that was cast upon his honor was too bad for him to take,” he said.
Arroyo, her husband Mike Arroyo, and son Mikey Arroyo also paid respect to Reyes.
“Self-inflicted” gunshot wound?
In a statement, the Philippine National Police said that initial investigation showed the “gunshot wound that took the life of the late Secretary appear to have been self-inflicted.”
Reyes had visited the graves of his late parents Pablo Paralejas Reyes and Purificacion Tomas Reyes at the Garden of Prayer at the Loyola Memorial Park in Marikina City at 7:30 a.m., where he later shot himself in his chest.
His sons, Judd and Carlo, rushed Reyes to the Quirino Memorial Medical Center. Reyes was declared dead on arrival.
Photo by Romeo Bugante/PRIB/NPPA Images
source: http://ph.yfittopostblog.com
Facebook Comments
Post Views: 46

Back tattoo led to arrest of ‘jealous’ ex of Jang Lucero’s...

Relationships: What Can Someone Do If Another Person Is Triggered?