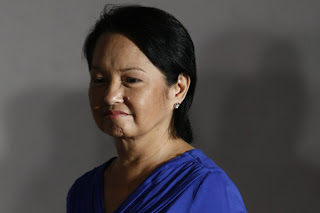 By Thea AlbertoYahoo! Southeast Asia Feb. 08 2011
(UPDATE 2) Former President Gloria Macapagal-Arroyo is also mourning the death of one of her staunchest allies, former Defense Secretary Angelo Reyes.
In a statement issued through spokesman Len Bautista-Horn, Arroyo urged Filipinos to “remember above all” Reyes’ “courage and patriotic service.”
“We join the family, friends and colleagues of Secretary Angelo Reyes in mourning his tragic passing,” Arroyo said.
It was Reyes who supported the revolt against former president Joseph Estrada, which paved the way for Arroyo to assume power as President.
Reyes was the Armed Forces chief when he defected from the Estrada administration.
“He served his country well in uniform and in the halls of government, particularly at a critical moment in our history when our people called for radical reform of governance, an extraordinary time that demanded extraordinary measures,” Arroyo added.
Arroyo appointed Reyes as Secretary of Departments of National Defense, Environment and Natural Resources, Energy, and Interior and Local Government.
Reyes who was embroiled in a recent military scandal passed away due to a gunshot wound to his chest Tuesday in an apparent suicide.
Reports said Reyes took his life before his mother’s grave.
Former President Joseph Estrada has also condoled with Reyes’ family, noting that despite their rift he will always remember Reyes as a “good general.”
“In spite of what happened at Edsa Dos, I will always remember him as a good general who played an instrumental role in our successful all out war against the MILF. I pray for the eternal repose of his soul,” Estrada added in the statement.
Photo by AP
source: http://ph.yfittopostblog.com
Facebook Comments
Post Views: 41

Justice For Nick , Architect Student New Victim of Robbery and...

Party Pilipinas All Stars and the Sun presents ‘Halo-Halo’