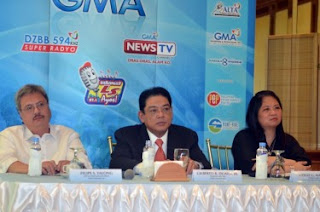 Notwithstanding the absence of P2.054 billion worth of revenues from political advertisements generated in 2010 and the global impact of financial crisis in Europe and slow economic recovery in the US last year, the Company delivered a fairly competitive business performance.

In fact, despite the cutback in the advertising budget of top multinationals whose headquarters are based abroad, the Network’s leadership in nationwide ratings won for the Company a substantial portion of the available ad spend.

GMA Channel 7, the Company’s top performing business unit and the country’s most watched television station, posted an eight-percent revenue growth from regular advertising during the financial period versus the preceding year, more than double the gross national product (GNP) growth rate of only 3.5 percent in 2011.

The channel also raised its ad loading minutes by 2.1 percent even with rate adjustments that took effect in February of 2011. ABS-CBN, meanwhile, suffered the hardest hit by the ad spend cutback among local broadcasting companies with a 7.1-percent drop in ad loading minutes during the comparable period.

GMA Radio, with improved ratings both in the AM and FM bands, delivered a 15-percent revenue growth from regular advertising. GMA Regional TV made a 21-percent hike year-on-year in recurring ad placements.

Meanwhile, GMA International ended 2011 with a six-percent growth in revenues in US dollar terms, but the growth rate slowed down to only four percent in peso terms due to the appreciation of the Philippine peso exchange rate. Total revenues from subscription, licensing and advertising revenues made thru overseas operations reached P965 million.

Both channels can be accessed thru a number of channel carriers in Filipino viewer-rich territories abroad such as the US, Canada, Middle East, Africa, Japan, Guam, Saipan, Hong Kong, Singapore, Papua New Guinea, Australia, New Zealand, Malaysia, Diego Garcia, Europe, and the Carribean.

The International Edition of the Philippines’ number one news channel – GMA News TV International (GNTVI) – currently airs in Australia, Canada, Guam, Japan, Madagascar, UAE and soon in Europe, Malaysia and the US. It is also now available for downlinking in North America.

In the domestic market, GMA continues its aggressive expansion efforts with the rise of capital-intensive originating stations in Ilocos and Bicol, which will be operational by the third quarter of this year.

Total operating expenses for the financial period had a single digit growth to P8.984 billion amid higher costing programs on primetime television, and the station-wide reformatting of Channel 11 from QTV to GMA News TV.

Total programming hours of in-house produced programs aired both on GMA Channel 7 and GMA News TV substantially hiked from 2010 to 2011, causing an 11-percent growth in production costs across all business segments to P5.105 billion. The aforementioned programming mix for Channel 11 drove down the amortization of program rights.

The four-percent rise in general and administrative expenses came mostly from the growth in personnel costs aligned with bonuses and merit increases to sustain competitiveness of compensation packages.

The year ended with earnings before income, taxes, depreciation, and amortization of P3.090 billion, and net income after tax of P1.715 billion.

The Company is poised to deliver better business performance in the new financial cycle. GMA used the 2011 drop in ad spend as an opportunity to strengthen its product and programming as reflected in its permanent standing as the nationwide ratings leader. This makes GMA an even stronger contender for a bigger share in the advertising pie as the industry recovers at the onset of 2012. As early as end-February this year, the GMA marketing group already closed 85 percent of 2012 sales targets with signed agreements from regular advertisers.

In both traditional and new media, GMA continues to be the Filipinos’ preferred source of news and entertainment.

With the recent launch of the Company’s umbrella site, www.gmanetwork.com, its online audience can access news, entertainment, and public service right at their finger tips anywhere.

The flagship international channel GPTV also made its mobile television service available to Filipinos in the Middle East. The service had 4,600 subscriptions in two months since its launch in September of last year.

The go-to portal for timely information, www.gmanews.tv, enlarged the presence of television content from GMA News and Public Affairs. The site has a lead of more than 200,000 followers over closest competitor ABS-CBN News Channel (ANC) on Twitter, and a similar lead over ABS-CBN News on Facebook.

On television, GMA kept a significant 3.1-point lead in household audience share over ABS-CBN and a whopping 18.6-point lead over TV5 in National Urban Television Audience Measurement (NUTAM) in the previous year.

GMA Films partnered with US Film Distributor Freestyle Releasing for The Road’s theatrical release in the US next month, making history as the first ever Filipino film to be distributed commercially in North America and Canada.