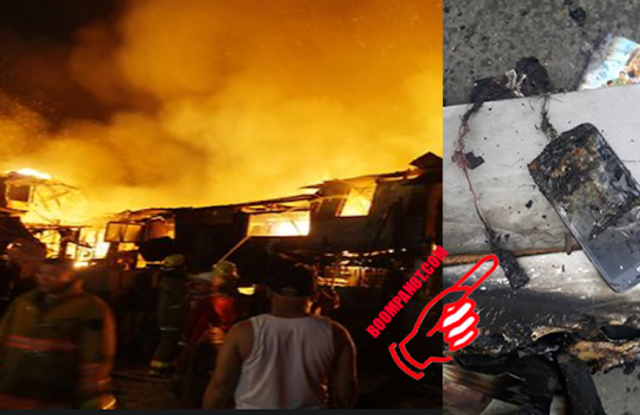 People are warned to be extra careful when handling electronic devices especially when they are plugged and left unattended. The aftermath scenario of this was shared by a netizen on his facebook in which she used different charger to charge her phone.

Daverianne Quibael Beltrano posted her horrible experience on facebook in which their house was caught on fire because of a phone charger. In her post, she narrated that her dad’s Samsung Galaxy S4 burned few minutes after it was plugged to charge using an Alcatel charger. She said the night before the incident happened the Galaxy S4 was left plugged the whole night but to their surprise the next day, the phone’s battery remained uncharged and was burning hot.

As a remedy, her mom decided to charge again the phone but in different outlet and using the same charger. She left the phone in their room and prepared to go to work. Few minutes later, their neighbours outside the house started screaming. Fire blazed from the inside of their room where the phone was left charging and unattended. Luckily, her mom was able to respond quickly and ran to her husband to instruct him to turn off the circuit breaker. Then, they started to put down the fire using a water house from their home.

Fortunately, no one got hurt from the incident. Beltrano ended her post reminding everyone to be extra careful when charging cell phones.

Kris Aquino talks about her TV comeback and accident in Cebu

Vina Morales on her love life: ‘I never thought of dating...