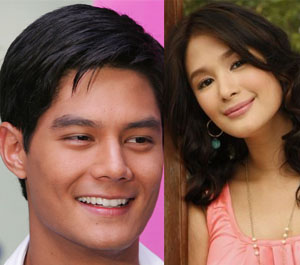 Brazilian-Japanese model Daniel Matsunaga need not worry if he decides to propose to girlfriend Heart Evangelista this year.
In an interview with “Showbiz Central,” the “Dwarfina” actress admitted she’s ready to say “yes” because of a sign that she asked to determine if Daniel is indeed “the one.”
“Kasi humingi ako ng sign kay God at binigay nya yung specific sign. Hindi ko na ido-doubt ‘yun at kine-claim ko na yun dahil OK na e,” Heart explained in the “Don’t Lie to Me” segment of SC yesterday.
Heart further revealed that the sign she asked from God is a Bible. “Humingi ako ng Bible. Tapos sabi ko, bigyan ako ni Daniel ng Bible. And then nasa church kami nun tapos sabi nya, ‘I think I want to give you a Bible.’ Hindi ko hiningi pero binigay na lang nya sa akin so I don’t think mangyayari yun kung hindi meant na mangyari,” she said.
For Valentine’s Day, Daniel said he plans to surprise his girlfriend. “Of course I want to make her very happy. For sure she will have different ideas and I want her to really get surprised with what I have for her,” he said. February 14 is also Heart’s birthday.
source: http://ph.promotion.yahoo.com
Facebook Comments
Post Views: 53

How to Get Rid of Dark Neck in 20 Minutes