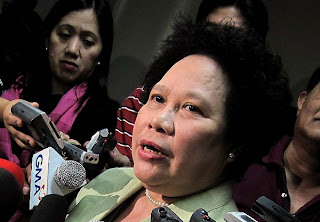 By Alexander Villafania, loQal.phFor Yahoo! Southeast Asia Feb. 08 2011
MAKATI CITY, METRO MANILA – Senator Miriam Defensor-Santiago believes someone should still be held liable for the alleged graft committed by deceased retired general Angelo Reyes.
In a statement, Santiago cited provisions under the Revised Penal Code, which obliges family members of deceased suspects in criminal cases to make reparations for damages incurred originally by the suspect.
The feisty senator quoted Article 108 of the Revised Penal Code that states: “The obligation to make restoration or reparation for damages and indemnification for consequential damages devolves upon the heirs of the person liable.”
Santiago also stressed that Reyes’s wife and children could still be summoned to attend Senate hearings investigating the beleaguered deceased general’s alleged involvement in graft.
She went on to cite the Anti-Graft Act, wherein family members up to a third degree of consanguinity are not allowed to “to capitalize or exploit such family relation by directly or indirectly receiving any pecuniary advantage from any other person having some business with the deceased in which the deceased had to intervene.”
Reyes allegedly received P50 million in “send-off” money after retiring as Armed Forces of the Philippines (AFP) chief, according to whistleblower and former military budget officer George Rabusa.
Reyes on Tuesday died from a gunshot wound in the chest in an apparent suicide while visiting his mother’s tomb at the Loyola Memorial in Marikina City.
***
loQal.ph is a website owned and operated by Filquest Media Concepts, Inc. It works under the principle of giving voice to the voiceless, empowering Filipinos and uplifting the image of the Philippines by highlighting its unique culture. To do this, the loQal.ph team produces stories, video, photos and other multimedia content types to inspire and celebrate Filipino achievements, ideas, products and places.
Photo by NPPA Images/Joseph Vidal
source: http://ph.yfittopostblog.com
Facebook Comments
Post Views: 47

Manny Pacquiao says that his new found Christian life is the...

MTRCB CALLS ‘TILL I MET YOU’ EXECS