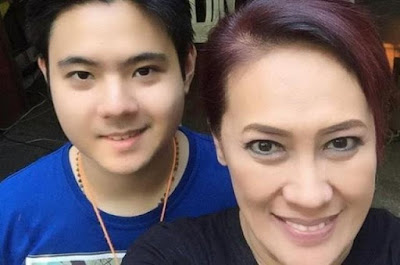 After being spotted wandering aimlessly around NAIA and being found on a decrepit and hardly no less than worse and miserable, Jiro Manio, the premiered and multi-talented young actor back on the last few decades, is now enclosed on a rehabilitation center after admitting involvement and addiction to illegal drugs on the last two years or so. After the life in ruins in the outside world, Jiro now shares a piece of life’s cake and is reportedly doing a great job inside the rehab. It is not a common thing for the media personnel to get a glimpse inside the rehab center, but the GMA News and TV was fortunate enough to cover Jiro’s current condition inside the facility.

Started off looking rather sickly and out of mind when spotted in the halls of the airport, Jiro was visited by GMA and saw that the young actor is now in great conditiom and looks more positive and recovered from the trivials he experienced in life. Fortunate enough to have his “Tanging Ina”, Ms. Ai-Ai delas Alas, who served as his second-mother and pursued him to be rehabilitated, Jiro has grown a healthy lifestyle, gained some weight, and a happier disposition in life.

While he was not yet allowed to return to the community because he had to finish the remaining days of his stay inside the facility, he shared his statement regarding what he has learned from being addicted to illegal drugs:
“Nagpapasalamat ako hindi dahil tinulungan mo [Ai-Ai] ako eh, kundi dahil ni-rescue mo ako. Oo, napagsalitaan kita pero humihingi ako ng tawad dahil wala akong nagawa nung mga panahon na naguguluhan ako. Gusto ko na magbago, gusto ko na ng mabuting buhay.”
[“I am thankful not because you (Ai-Ai) helped me but because you rescued me. I know I have said some things I should have nog said to you and for that I am sorry especially on the days I am not in my own mind. I want to change, and I want a better life.”]

[“I will finish this because I don’t want to be involved on the commotion outside. And I don’t want to force myself to do things that in the end, I might regret it or it may cause harm to me.”]

We all know well for a fact about the government’s rigorous campaign against illegal drugs and when Duterte says something, he means business.

MTRCB CALLS ‘TILL I MET YOU’ EXECS

Maine Mendoza of the Philippines Named Ultimate Asian Sweetheart of 2018