Internet couple sensation Team Jolai has now parted ways which shocked their fans and followers. What’s the reason behind their break-up?

Jelai Andres, the other half of Team Jolai, broke her silence online that led to their fans to speculate that Team Jolai is not sailing anymore. In her post, she indirectly expressed her anger towards her boyfriend Jon Gutierrez AKA King Badger.

Her post pertains to women who always give their all to the man they love but later chose to break their heart by having an affair. What’s more irritating is that some men even got the guts to do the unfaithful in public and have the great confidence to initiate the break-up.

After sharing the said post, many speculated that Andres was pertaining to her boyfriend who was found by some being intimate to another woman which they identified as R-breezy model Toni Fowler. One netizen commented in Andres post telling that he saw Gutierrez with a girl acting sweet to each other while one netizen replied wondering the rumors might be real. 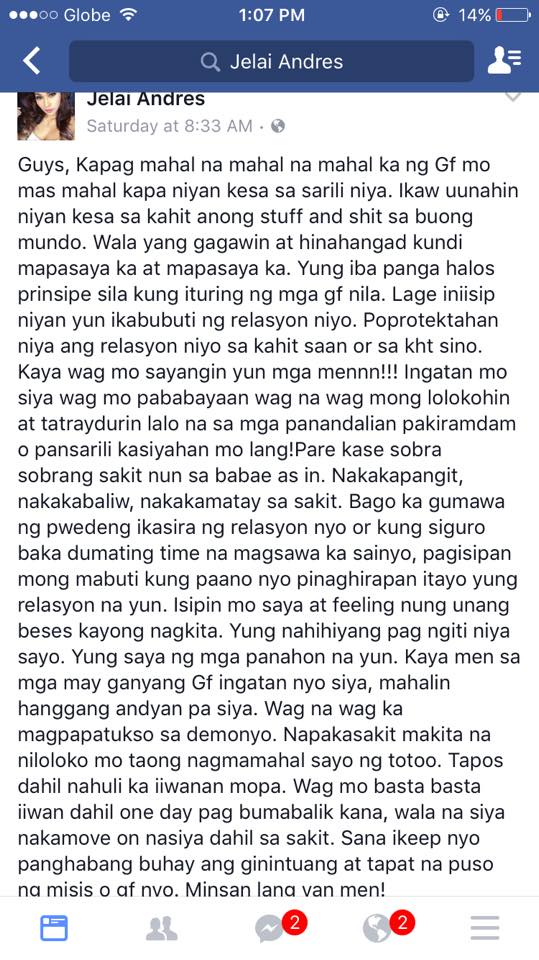 Few photos came out showing the possible infidelity. One showed a photo of Gutierrez with friends along with Toni Fowler sitting right next to him.

To those who didn’t know Team Jolai, the couple became popular through their videos and the most viral among those was the video wherein Andres was being filmed by Gutierrez while she was having a hard time parking their car but later revealed that she got all space in the car park to park their car.
Upon seeing the photos and reading Jelai Andres’ post, do you think a third party was the cause of their break-up?

Trending : Duterte tells story why PH should leave US