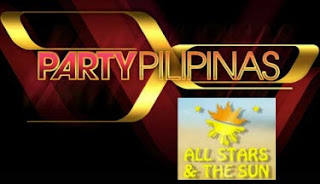 Summer never ends for the number one party on television, join a celebration of everyone’s favorite season this Sunday on “Party Pilipinas All Stars and The Sun: Presents…Halo-Halo”!

All of the brightest stars align for an opening worth the remark “Boom!” The Asia’s Songbird Regine Velasquez reunites with Queen of Soul Jaya, RNB Princess Kyla, Fierce Songstress Rachelle Ann Go, and ace La Diva Jonalyn Viray to pay homage to a diva known to this generation as The Voice.
King of Soul Janno Gibbs, Premiere Singer-Songwriter Ogie Alcasid, RNB Prince JayR, Mark Bautista, Kris Lawrence, Gian Magdangal, Jay Perillo, and Dingdong Dantes join forces with the OPM Legends for a number that emanates Pinoy Pride.
Sing along to a repertoire that covers classics to current hits on VOX and Party Pilipinas All Stars. It’s Lady Gaga meets Madonna for Kyla and Rachelle Ann a.k.a ShinKy.
Catch the Keso Boys as they croon to all the cheesy tunes that send giggles to girls both young and young-at-heart. It’s the girls’ turn to bring the boys out on Gen Next vs. GirlSquad.
Enjoy not one but two servings of Sayaw Pilipinas with your favorite dance crews and Tween stars. Tween generation’s most sought after tandem of Julie Anne San Jose and Elmo Magalona, a.k.a Julielmo, wears their pumped up kicks for Rap Acoustic.
“Party Pilipinas All Stars and the Sun: Presents…Halo-Halo” airs this Sunday, April 8, 2012 at 12noon on GMA.