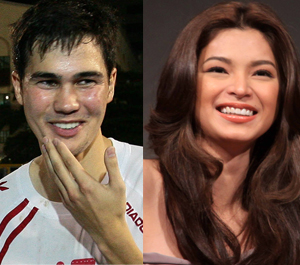 After the successful win against Mongolia on Wednesday, Philippine Azkals booter Phil Younghusband has officially asked “Imortal” star Angel Locsin for a date this coming Valentine’s Day through Twitter.
In his recent tweet, Phil casually asked Angel if she has any plans for Valentine’s Day.
Phil tweeted on Thursday, February 10: “@143redangel Hi Angel! This Phil. How are you? I was just wondering if you are free for Valentines day?” Phil said.
But Angel’s reply was “@PhilYHusband hi! this is angel☺ Congrats on your win last night! Tnx for the invite but I have work on valentines.. Let’s try another day☺.”
Phil earlier declared his admiration for Angel and fellow Kapamilya star KC Concepcion. After Piolo Pascual admitted the real score between him and KC, it seems Phil now has his eyes set solely on Angel.
+++
Facebook Comments
Post Views: 39

Vina Morales on her love life: ‘I never thought of dating...

Cristine Reyes admits she and Rayver Cruz talks about marriage