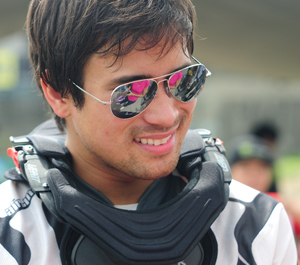 Sam Milby is known for playing reserved and sheltered roles onscreen. But in real life, that can’t be farther from the truth. Looking at the sports he’s dabbled on reveals that Sam is someone who constantly needs to be active, regardless of the risks the activity entails.

“Halos lahat. Tennis,wrestling, hockey, golf. Nung bata ako, I even did a little bit of gymnastics. I play a little bit of soccer and volleyball. I tried wakeboarding,” he said.

Still, nothing can be more extreme than his current sporting passion right now: motocross.

Motocross is an all-terrain motorbike sport. Although similar to motorcycle racing, motocross however uses an enclosed off-road track as opposed to public roads or a multi-purpose pavement race track. There are a number of motocross variations, including freestyle motocross and supercross.

But why would Sam put himself at risk just to do motocross?

He added, “Figure skating, it wasn’t really my choice, per se. I started when I was three years old. I’m very happy naman that I did it but motocross is really my passion when I started it. I like the adrenaline rush, I like the speed.”

Sam said he has been to the off-road race track to motocross thrice this year.

“I have to take advantage of the time that I have kasi pag nag-start na yung movie, wala na,” he said, referring to his planned movie with KC Concepcion.

Sam, however, has no plans of going pro, especially since he’s aware of the level of commitment it would involve.

“Races, yes, pero hindi yung talagang competitively na all the time. It’s more for fun. Siyempre, hindi ko pwede i-push yung sarili ko. Kasi when you push yourself, you’ll definitely get hurt, so, siyempre may movie ako, may teleserye. So I can’t really (risk my safety). I have to be careful naman,” he said.

But he has no plans of stopping, even with the possible injuries he may have and the slight opposition from his management.

And Sam has had a few accidents, he said. “I’ve had many crashes, yes. Last time pa lang, I fell two or three times. Ang problema lang last time, when I fell off, I threw the bike. So when I landed I was fine and then the back tire all of a sudden landed straight on my knee and made it a lot worse. It’s not that bad, but sore,” Sam related.

“Technically, I haven’t had that bad of a crash to really get traumatized. I’ve broken my hand. I ran into a tree during a race and still finished the race. I’ve had some really bad crashes—one very high speed crash and I landed on the wrong side of the landing jump so I was probably going 50 miles per hour, at least. My dad saw it and he thought I died.”

Still, he concluded: “It’s not been that traumatic.”

Would he be open to playing a character into motocross for one of his films or television shows?