The love and hate relationship of Team Jolai is now starting to become a facebookserye which all came to start with Jelai Andres’ post indirectly striking boyfriend Jon Gutierrez for his alleged infidelity. What’s their status now?
Recently, the alleged third party between Team Jolai went viral due to her cousin’s post showing the aftermath of all the bash and hate that Toni Fowler had earned after her name was being dropped by some netizens as to having an affair with Jon Gutierrez. 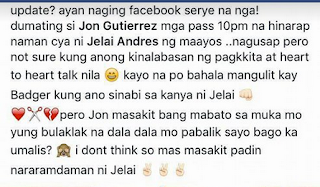 Now, Jon Gutierrez tries to make things right by courting Jelai Andres again to win her heart back. In one post that cycle on Facebook, photos of Gutierrez carrying a bouquet of flowers and giving it to Andres with full of regret from what he had done brought different reactions from netizens.
To those who supported the couple all throughout, thought that Gutierrez’s move was sweet which led to their supporters to hope for the better. On the other hand, others were on the side of the woman being cheated on that the act should not be tolerated like how Andres reacted after she and Gutierrez had a quick talk.
According to the post, Andres threw the bouquet of flowers straight to Gutierrez’s face before he walked out from Andres’ residence. The netizen who reposted the photos believed that the act was justifiable because Andres was just a victim and incurred more pain in the process
Facebook Comments
Post Views: 56

Duterte to talk to health experts on whether ECQ will be...

Erich Gonzales says she and Enchong Dee are still close even...